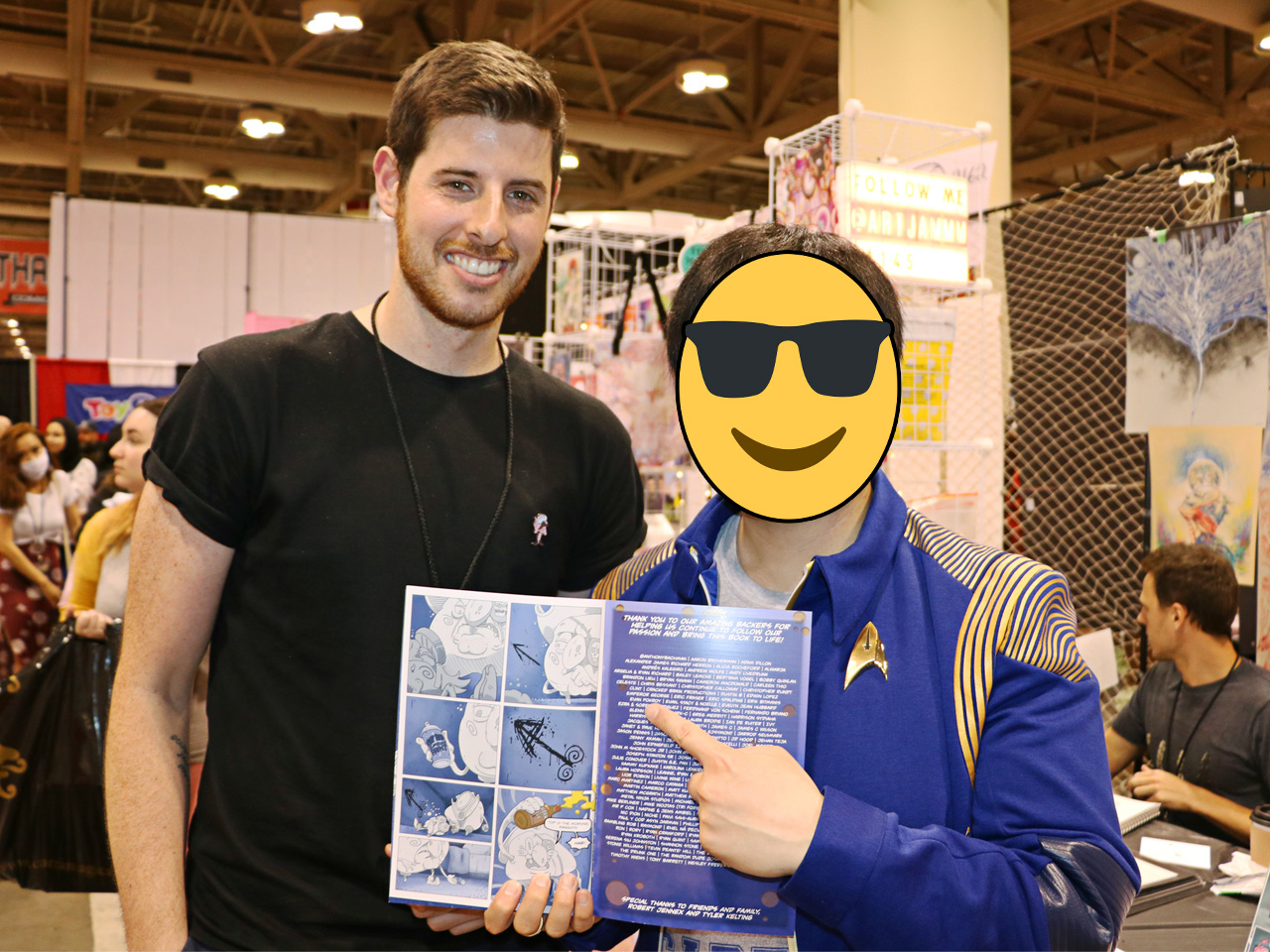 Toronto is a city full of talented indie comic creatives. There are a lot of local creators that have published some great stories and one of them joins me today. Daniel Brodie is the creator of Morgan’s Organs, a cute little comic I discovered on Instagram by accident one day and became an instant fan of. I ended up visiting Daniel at his Comicon table a few years ago and the rest was history.

EMPEROR: While we’ve had our casual chats at conventions, Daniel, it’s great to finally sit down with you for an official interview…

Thanks very much for having me. We have met a few times at conventions so you already got a solid grasp of my vision for the series. Always great to chat with a true fan of the series.

So let’s start off with the basics…

Can you introduce the concept of Morgan’s Organs for those hearing about it for the first time?

DANIEL: To put it simply – Morgan’s Organs is like Pixar’s Inside Out, but the adult version. To give it a bit more meaning, this comedy series imagines the human body as a sort of office, with rooms throughout where organ operators live, work and play. Except these organ operators (called Organauts) have lives of their own, so what they choose to do is not always in the best interests of the guy they live inside – in this case, a university student named Morgan.

The real kicker that makes Morgan’s Organs special is that we don’t filter our view of the anatomy – so there is even a talking penis character!

EMPEROR: Of all the stories to tell, why inside the human body? Where did you get the inspiration and/or how did you come up with this concept?

DANIEL: It’s tough to say why I chose the human body for the setting. If I had to give an answer, I think because there is just so much opportunity for storytelling, both inside and outside of the body. There are situations that I can write about that mostly occur within our body, but then there are also situations that can come about because of the things that Morgan does. I think this idea comes across in Book 1 as we see the consequences of Morgan’s confusion to his self-esteem, while also seeing the same situation unfold within.

The concept came to me while I was on a back-packing trip in Europe back in 2013. I was walking around Amsterdam (ahem), and the idea just floated into my brain: “What if all the organs in our body had their own voice, what would they say to us?” It’s a bit of a frightening thought, to have your body parts potentially be working against you, but it was an idea that stuck with me. It really was just a vague thought when I first came up with it, but I stuck with it and honed the idea over a few years before fully pursuing it as a comic book series.

EMPEROR: Who is Morgan based on? Are the stories inspired by your own real life experiences?

DANIEL: I wouldn’t say Morgan is based on anybody in particular, and I can’t say I’ve fully been through the experiences he’s gone through. I definitely sympathize and connect somewhat with Morgan though as he tries to discover who he is in college. Mostly, I intentionally wrote Morgan to be this average, run-of-the-mill kind of guy, because the true excitement happens within his body. I wanted Morgan to be a bit of a sponge, soaking up the things his friends tell him to do and being a bit awkward, because I think it helps to make the organs shine.

EMPEROR: It’s brilliant how you’ve managed to make human insides – something that can be considered rather disgusting – into something adorable. Can you talk about the process of how you achieved that?

DANIEL: I think like 90% of that is because of the series lead artist, Robert Jennex! The style and vision that he brings to the series is just incredible. I don’t think Morgan’s Organs would be anywhere without him, and I think the stories could very well give off a different impression to readers if the visuals weren’t so disarmingly cute.

For me, I try to include a wide mix of humour and situations in the books – from gross to dark to horrific to fun and lighthearted. But really, it’s all on Rob for making my words translate well on the page.

EMPEROR: I like how it’s pretty much a Star Trek ship crew inside Morgan, complete with character dynamics and relationships, etc. Reminds me of that movie Meet Dave (2008). How did you decide the appropriate personalities to match with each organ and the names to go with them?

DANIEL: I can’t say I’ve seen that movie, but I assume it takes place in a guy named Dave’s body. Star Trek was definitely an influence for Morgan’s Organs – I even have an old script that involves Morgan getting into a life-threatening situation, and the story rapidly flips between all the rooms as the organs do their part to fix the situation. (I can’t say it goes well…)

In developing the organ characters, I would say that two key questions ran through my mind. The first question was “what would you expect the personality of this character to be based on the functions they perform within the body?” The second question was “do I align to this expectation or completely flip it on its heels?”

I’d say a great example where I flip it on its heels is Andy the Appendix. Given he has no functional purpose in the body, he’s generally rejected by the other organs, leaving him in a constant state of loneliness. Rather than making him this sad character, I developed him to be this hyper-intelligent, philosophical being who spends all of his time reading and acquiring all the knowledge in the world. The other organs still reject him (even though he’s usually right), but it never breaks Andy’s spirit completely.

EMPEROR: Among our past conversations, you once told me it would be your dream for Morgan’s Organs to be a TV show airing on Adult Swim or the like. So let’s talk about Morgan’s Organs: The Animated Series!

What song or instrumental theme would be the official theme of Morgan’s Organs?

DANIEL: There’s already a theme song for Morgan’s Organs! It’s a bit of a tongue-twister, but it’s very simple and wonderfully wacky. I think it captures the essence of the series quite well. You can check out the theme song at the beginning of our video on the Kickstarter campaign page.

EMPEROR: Who would be your preferred actors to cast for each character in the comic?

DANIEL: Unfortunately, I can’t say I’ve thought that far ahead! It’s weird being the writer and creator of a character. Each character has such vivid personalities and characterizations in my mind, but I can’t say that I’ve fully pin-pointed how their voice sounds. Though I feel that when I do hear the right voice, I will know instantly for each character. If I had to give any name right now, I could probably see Michael Cera as Morgan!

The one funny thing is that I met the person who has the perfect voice for one of my more minor characters at a convention in Toronto. I got her on speed dial for when we make it to the big screen.

EMPEROR: I want to play a little casting game here. I will blurt out a few names and you answer the best organ character to cast them as. Of course, we’re just going to disregard how much money you’d actually have to pay to get these people and just play along for shiggles!

Well, he does kind of make an appearance as himself in Book 1 as part of Morgan’s sub-conscious. So Morgan Freeman as Morgan Freeman! But perhaps he could make a good Andy the Appendix too.

If I cross Arnold with the Cookie Monster, he could be Meats the Stomach!

He’d be so great! Maybe Pepe the Penis – or maybe a character yet to be created.

…and yes, if you can’t already tell, I have an affinity for certain celeb voices!

You chose some great names. Now you got my mind churning and thinking about the TV series.

DANIEL: As a huge fan of Rick & Morty, I would say anyone who likes that show should like Morgan’s Organs. Really anyone who likes adult animated comedy should dig this series. I have heard many times before that the series reminds folks of Ren & Stimpy, so maybe people who like that show too.

EMPEROR: Ok, now let’s get back to present day where Morgan’s Organs is still a comic… but keeping in mind that big things start small…

I‘d imagine creating something that exists only in your mind from nothing to reality must be pretty daunting. Thinking back to the defining day you said “that’s it, I’m going to make this happen now” – what was the first step of your action plan that you took to make this all happen?

DANIEL: This is a great question, and a tough one to remember since it was so long ago (2013). I think the first step for me was fully accepting that I had a concrete mission: making Morgan’s Organs a real thing! It’s one thing to think of a great idea – I’m sure every person has had one at some point – it’s a whole other thing to take physical steps to make it happen.

After convincing myself I had a real goal, it was about getting my butt in a chair and spewing ideas onto paper. Most of these ideas were probably terrible, but between writing, and thinking and trying to put the puzzle together, the concept began to develop slowly but surely.

EMPEROR: Absolutely, and I sense potential in this fun series, so many possibilities…

And thus, that is all the time we have. Daniel, thank you for dropping by and looking forward to more as always!

Thanks George, appreciate your interest in the series. Now let’s make this bread!

In the meantime, the Kickstarter campaign for Book #3 was launched just 6 days ago and is already 100% funded – but you can still contribute for fun perks and be a part of history!

I highly recommend everyone check out Morgan’s Organs, if you haven’t already. It’s bound to put a smile on your face… believe me, it managed to crack my resting bitch face! 😅

Plus, if you are in Toronto, you can meet Daniel this Saturday at the Silver Snail, where he will have Books 1 & 2 with him for signing as well as various other goodies like this tremendously cute Pepe figurine pictured with my @TrumpFigure. 🤣 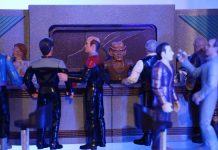