Who is Nerd Emperor? 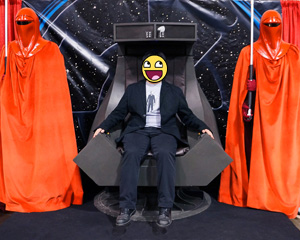 Having self-taught myself HTML coding when I was a kid, I have been building websites for as long as I can remember. It wasn’t until 2008 when I decided to start my own “official” website with the intention of it acting as a web portal for all things me in response to some people in my daily life saying I seemed so “mysterious” and “emotionally unreadable” – thus, my personal blog site was born where I could express myself and share my interests, hobbies, travels, outings and other miscellaneous ramblings for those who cared.

Eventually, my original blog became populated with too many posts on local events as a result of living in the city from 2015 onwards – often not even pertaining to nerd-relevant content – and it grew so messy to the point it was treading on the things I truly wanted to showcase upfront. That is when I decided to have a separate domain for the blog…

Proclaiming myself as a Toronto Lifestyle Blogger, EmperorGeorge.com acts as my personal blog and is basically about all things local in and around Toronto such as entertainment & community events, food & dining, celeb encounters, etc. so as to not distract NerdEmperor.com from its main purpose to showcase my toys and other nerd-related content. Think of it as a YouTuber having a second channel that focuses on their daily life and other off-topic stuff. That said, I don’t know why anybody would be fascinated with my life but apparently, there are people who do… 🤷🏻‍♂️

If you are so inclined to learn more about me, feel free to continue on over at the EmperorGeorge.com ‘About’ page. Thank you for your interest and caring. 🙂

Since 2005, I’ve been known online simply as The_Emperor or ザエンペラー (Za-Empera) as I didn’t know what username to choose on an online forum back then and Emperor Palpatine was my favourite Star Wars character, so I just went with that. Eventually in 2014, I ended up changing my alias as some websites wouldn’t even let me register such a generic username. That’s when I decided to go by Nerd Emperor after combining a title I’ve become synonymous with and what I basically am by nature. That said: if nerds were mutants, then I’ve always seen myself as the Magneto of nerds. To hell with conforming with those Normals… I’ve fully embraced what I am – NERD and PROUD! ✊🏻