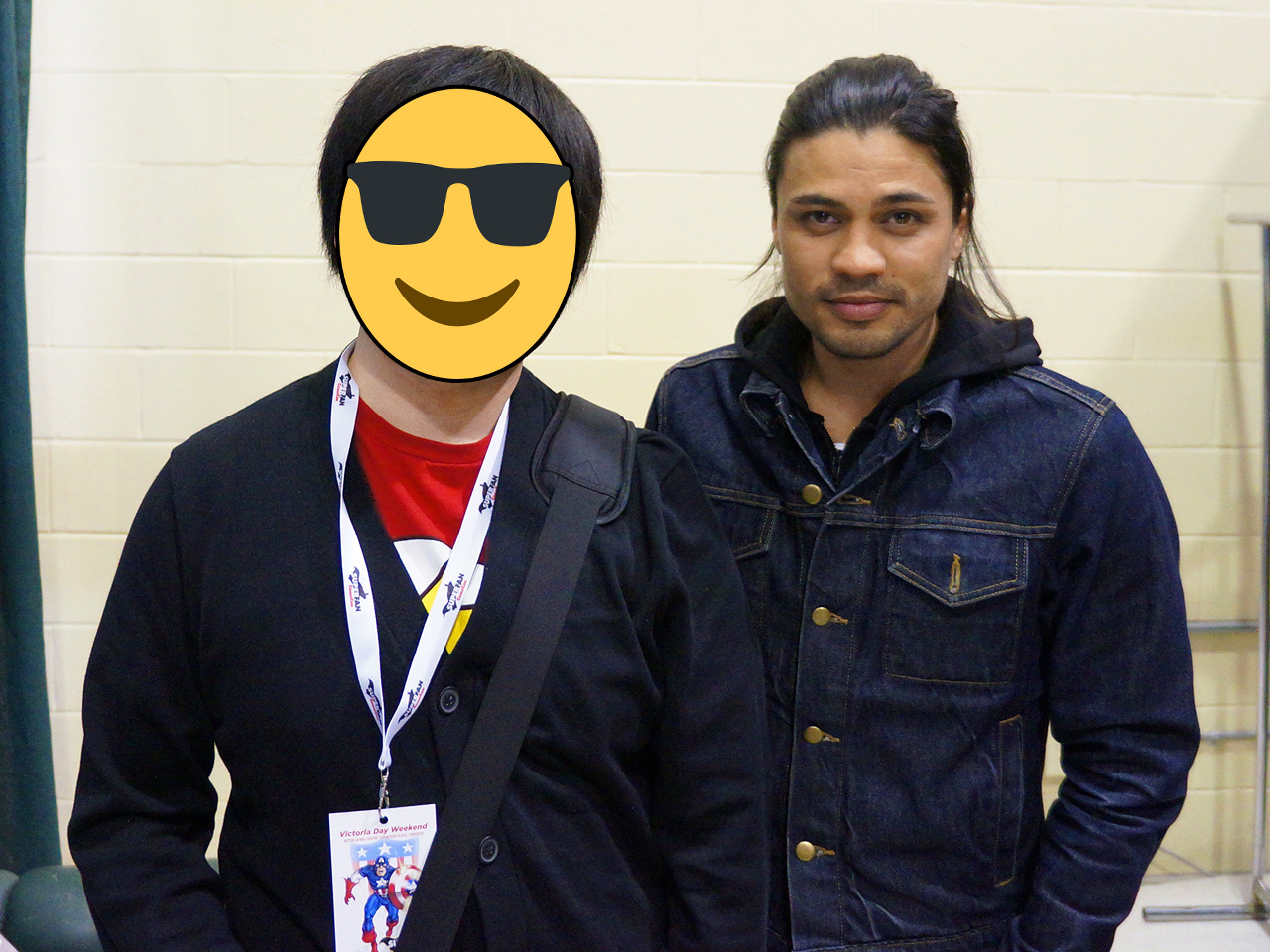 In part 2 of 3 of my series of SuperFan ComicCon interview posts, I sat down with Jeff Parazzo who played Trent, the White Dino Ranger, on “Power Rangers Dino Thunder”.

I attended to SuperFan ComicCon as media under HJU so I, of course, posted the final product of my interview on their site. However, this extended/full cut contains a few personal thoughts and things I shared myself so I will be posting it on my site only.

Alas, I forgot to press record when doing the intro small talk portion so I do not recall what was said anymore. Thus, we will jump right into the first question of the interview…

Yeah, I was familiar with it. It was just a little bit before my time, but I was familiar with the original Rangers and Jason Frank. It felt really good when I got the part — like any actor getting any part. It’s all apart of the art, it’s an incredible feeling.

Uh, I was a little nervous. I wasn’t sure how it was gonna change things. I came from a slightly different background and was doing a lot of independent films. I was steering my work to go in that direction and then when Power Rangers comes calling saying they want you to be apart of it, you’re flying across the country to New Zealand — y’know,  to set up life there for a year and a half to shoot this crazy show that could change everything. Um, it was a good choice. Glad I did it, but I was very scared at the start.

I caught a little bit of it after… and when I mean after, I mean like 8 months ago. First time I watch some of the footage — outside of the footage they would piece into the show. It was a lot darker.

How did you get the role as Trent, the White Dino Thunder Ranger?

My agent sent me a breakdown for the show and asked me if I’d be interested in reading for it. Um, that’s how it started. I read the sides and I got to audition for it once, got the callback, producers came in from LA the next time around and I basically got the part on the spot even though it took me 2 months to sign the contract.

Well, yeah, I think so… there’s some familiarity. I feel like Trent felt like an outsider when he first appeared. You know, there’s a lot of times in my life where I feel like an outsider too like I’m just staring at everything that’s happening in front of me but I’m not completely apart of it. You know, like just standing outside watching it all. I feel like Trent felt the same way. He was in a new city, new parents, new life — trying to figure out where he fits into this whole thing. So I think that’s a similarity right there.

First time I got off the plane in New Zealand when we arrived in Auckland — that was quite a beautiful memory for me. First time we got to go to set and getting to see where we were gonna be working — that was amazing. And then, every single time we got to shoot in the back country in all the mountains — you’re shooting but you’re overlooking all these peaks and valleys — those are the kind of things I’ll never forget.

It was great. There’s a lot of stories about Jason… lots of rumors, you know, such a big personality… but he was amazing to us. We had out like, me, Kevin Duhaney, and Jason were just kind of hanging out with each other the whole time we were in New Zealand together. I mean, Jason was there for most of it but he had to leave for other projects for a little while in between but everytime we were in Auckland, we all stuck together. It was like the North American crew kind of just tied together, you know.

He is kind of a jokester, yeah… we had to do scenes where we had to be in pain or feeling stuff even when we weren’t. We were lining up for a closeup shot — you know what I mean, the camera was tight on your face and then you’ll just have someone grab you and squeeze you and like a pressure point and you just start screaming right? Because he’s got strong hands and you do that all the time. Just trying to mess around with your own take so you have to keep re-cutting it and re-cutting it.

Any episode and any scene where I was the Evil White Ranger were kind of my favorite times. There wasn’t just one specific episode. It was just everything that had to do with the evil Trent character — they were all just so fun and interesting to play because I was always messing around with the other guys… and lying to them and tricking them, you know. So anytime I was evil, it was a good time on set.

Honestly, my first… I was a bit embarrassed with it. As time went by, it was easier to accept when people were excited to meet you or you tell certain people that “yeah I was in a Power Ranger show” and then everyone would get so excited around me, it was hard not to get excited. You know, it’s contagious.

I am surprised. I mean, we’re going onto 21 seasons now right? 22nd season? And it seems like there’s a really big resurgence right now because they released the movie details about the potential movie project. Uh, the Dino Charge brought back like the Dino Thunder excitement. Um, I mean it gets bigger and bigger. I’m surprised at how important it is for a lot of people. As they grow older, you know, it’s remarkable.

I think it’s great for everybody, especially the fans. The last time — when was the last movie they had? Like mid-90s/late-90s? I mean it’s a great idea to bring it back. They’re doing all kinds of superhero revamps and it would be great to see what they did with it today. In 2014, I guess if they were to shoot in say 2015 and maybe a 2016 release date, can you imagine the effects they could put into it and what the Power Rangers would actually be doing in a movie today?

Hmmm, I would like for it to be a darker film. You know how they did all the Batmans and they made it a little darker? It would be great to see a slightly darker and maybe a little bit slightly older version of a Power rangers movie. Still all the fun and excitement for the kids but just a little darker, you know. I would like to see them go through a little more dirt to save the world — that would be kind of amazing.

Michael Bay? …nay.
J.J. Abrams? That’s a yay.
Christopher Nolan? That’s an absolute yay, for sure.
Joss Whedon? Maybe.
Paul W.S. Anderson? …nay.
…Matt Austin? That’s a maybe. I’d have to talk to Matt first… he’d have to pay me for that yay, you know? 😛 Nah, he’d be a great choice too. It’d be great to get a Green Ranger to direct. How good would that be for fans.

There is a petition going on online, yeah… all the luck to him.

Two projects coming up: one short film in development right now that I’m directing and writing and actually, me and Kevin are collaborating on an exciting project — can’t really talk about it yet too much — but it’s gonna be really exciting for the fans. Yeah, the Comic Con fans would get a real kick out of this project, but we just gotta get the details ironed out first before we can go into more talks about that.