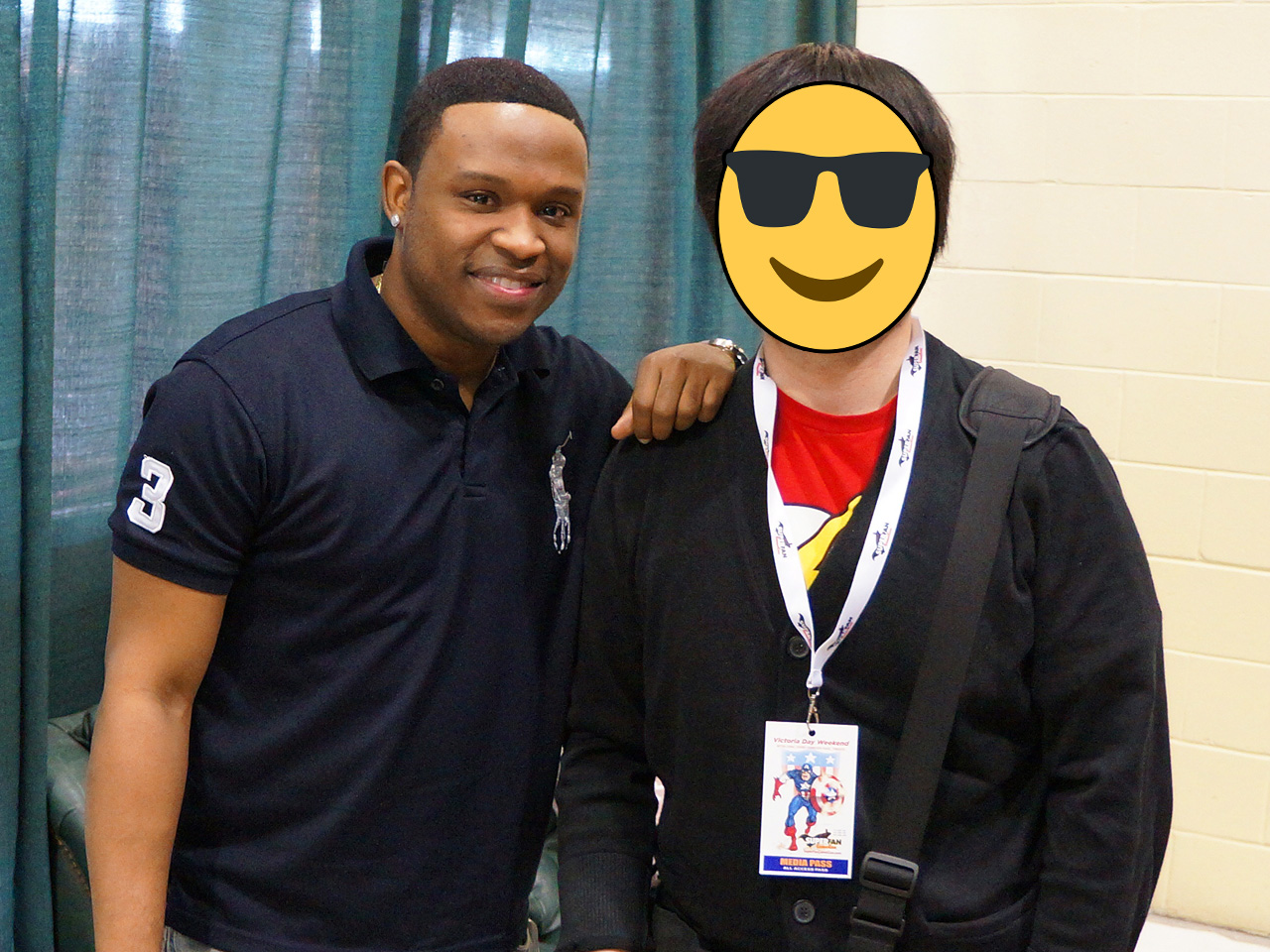 In part 1 of 3 of my series of SuperFan ComicCon interview posts, I sat down with Kevin Duhaney who played Ethan, the Blue Dino Ranger, on “Power Rangers Dino Thunder”.

So glad to finally meet you – being from the area, I’ve wished for a long time that Power Ranger actors from Toronto would appear at local conventions here…

First, I just want to say I’m a huge fan of Dino Thunder. It was the series where I regained interest in Power Rangers in 2004 ever since I stopped watching back then along with everyone else I knew who had “moved on” to other things while growing up.

Anyway, without further adieu, let’s move on to the interview…

My name is Kevin Duhaney, and I play Ethan James on “Dino Thunder”… and it was a blast.

I was familiar with it and I grew up watching “Power Rangers” when I was a kid. I actually grew up watching JDF (Jason David Frank) so to come back and have him as my mentor was the most surreal feeling in the world. Like, I was super excited – couldn’t wait to get started.

Yeah, I was very nervous just because of the simple fact that I was quite young when I got the role. I think I had just turned 18 when I got the role so it was a bit nerve-wracking and the fact that I had to move to the other side of the world and be there for pretty much 8 months. I was very nervous but I met Jeff Parazzo, who plays Trent, on the plane and we clicked right away and became best friends — still are to this day — and he made it a lot easier for me too. He and Jason – (Jeff) helped me along too on set once I got there… but I in the beginning, I was quite nervous.

I haven’t seen any Abaranger before we filmed it but while we were filming, I did see some of the stuff. Um, mostly when we did ADR and the one episode where they did show a couple clips of it so that’s pretty much the only time I got to see it. And I liked it. I thought it was cool. Really good, very well done.

How did you get the role as Ethan, the Blue Dino Thunder Ranger?

My agent called me and let me know there was an audition in the city for um… actually, she didn’t tell me what it was for so I got the script and was reading through it and I thought “wow, this sounds like something that could be Power Ranger-related. So I went back to the front and when I saw it was Power Rangers, I freaked out — I called them back and said I can’t wait to go. So I went in for my first audition and luckily they liked me, called me back and I went back — that’s when I met  Douglas Sloan. I did my second audition and within a week of that, I was flying out to New Zealand to do the show.

I loved it. It’s such a beautiful country. Everyone’s super nice and I actually can’t wait to go back. It’s like a second home now.

I would say I’m a little bit similar, just in the fact that I am kind of a nerd myself – I like video games, I have an Xbox and an Xbox One , you know I’m always on the computer . but I wouldn’t say I’m as smart as ethan. He’s really tech-savvy and I wouldn’t say I’m there yet.

Did you have any say in your character?

Not really. It was pretty much already written so it was just up to me to bring it to life.

Man, so many of them. Good question. I’d have ot say the feeeling of finding out I was going to be a Power Ranger is really high up there. And Probably the firest day I put on the suit. That’s when it really hit home and I looked in the mirror and said “Aww yeah, this is nice!” 😀

It was amazing. Like I said, I grew up watching him so uit was a great feeling… it was one of the first things I told him. When I met him, I was like “dude I grew up watching you, I’m a huge fan. This is like amazing for me right now. He actually taught me a lot. Cause I was very nervous. I was young when I got the part — I was only 18 — so he taught me a lot. He kind of schooled me and helped me to do the right thing on set.

We would always play pranks on each other — all the time on set. Like, we had these little clips that we would put on the back of people’s shirts and stuff like that. And they’d be walking around not knowing they had it on until they sat down and it would clip and make a lot of noise. So we do stuff like that. He’s really fun. Really fun the work with.

It’s a GREAT feeling, man. You know, people know me as a Power Ranger? It’s cool. I’m a superhero. Every kid — every person — at some point in their childhood wishes they could be a superhero, right? If you didn’t, you at least wore a costume on Halloween or something like that. So it’s a great feeling.

Um, not really because I knew how they go when I was a kid. Such a great show, so I didn’t think it would change too much. Because if something works, it works. It will always have that kind of fanbase.

Without a question, wouldn’t even need to think twice about it… I would be there!

I think it’s exciting, man. The fans are gonna love it and I honestly think it’s going to be A LOT better than the last movie was, I can tell you that.

Um, me personally… I think it would be cool if they made it a bit darker, almost like The Dark Knight and kind of made it that grittier feel. But I mean, it’s Power Rangers at the end of the day, so I don’t think they can do anything wrong and it’s going to do well no matter what.

Yeah, I’m actually… I do the voice of Cameron on Total Drama Island: Revenge of the Island. So I did one season of that now and Total Drama All Stars. So I think they’re actually replaying Total Drama All Stars right now on Teletoon so you can look for that. And I’m in the process of so doing another cartoon right now called Looped. I can’t really talk too much about itbut you guys can look forward to it towards the end of 2014.

Do you still keep in touch with any of the other cast?

I saw JDF not too long ago, Lexington Kentucky, Lexington Comic Con. I see Jeff all the time. We hang out like once or twice a week because we’wre both from Toronto. I still speak to Emma Lahanna quite a bit too – on Twitter back and forth. That’s pretty much it.

Thank you! It was nice meeting you too!